This recipe was shared over at weekend potluck by The Country Cook! and at Meal Plan Monday by Southern Bite!

My husband’s favorite dessert is Robert Redford.  I’ve shared the recipe for that before on my other blog, This Farm Family’s Life.  It’s not often that I can’t figure out what dessert to make, because baking is my favorite thing to do in the kitchen, but if I’m in a slump and I ask him, he will more than likely request Robert Redford.  So, when I was perusing the world of Pinterest the other day and discovered a recipe for Pumpkin Lasagna, I knew I wanted to give it a shot.  I renamed it Pumpkin Robert Redford because the recipes are similar.

I did alter the original recipe because the original said to bake it in an 8×8 pan and that seemed pretty thick to me and, let’s be honest, when I make anything in an 8×8 pan it only lasts about a day!  I didn’t double the recipe, it just made it a bit thinner which is just fine for me.  A friend’s husband commented to me that he isn’t a big fan of pumpkin recipes, but he did like this one.  Their is just enough cinnamon and pumpkin to accompany the cream cheese and vanilla pudding to give it a taste of spice. 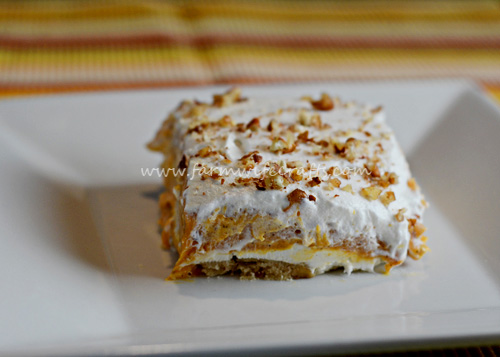 Time certainly is flying and it’s hard to believe we are thinking about fall, Thanksgiving, and *gasp* even Christmas recipes.  This recipe is perfect for fall and would be a great addition to any Thanksgiving feast! 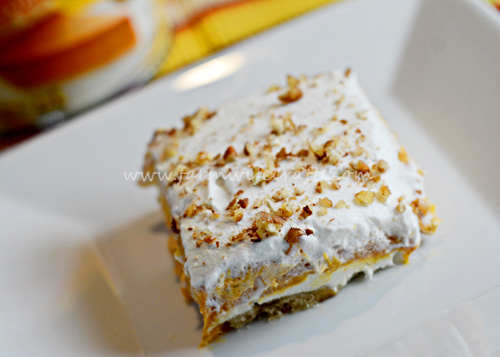 This post was part of a linky party at: https://www.thecountrycook.net/elvis-sheet-cake-weekend-potluck-394/